< Back to the activities calendar

Located in the heart of Quartier Latin, this monument is a witness of some of the greatest pages in the history of France – Paris 5 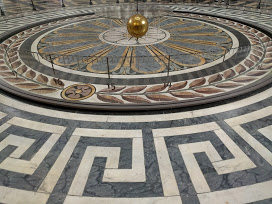 Its silhouette and its dome stand out on the Sainte-Geneviève hill in the Latin Quarter. This former basilica dedicated to Sainte Geneviève was transformed in the French Revolution into the secular Pantheon to house in its crypt a necropolis of great figures of the History of France – including Voltaire, Rousseau, Victor Hugo, Marie Curie and Alexandre Dumas. You will discover how Napoleon III brought in many people in less than 2 years. We will admire the pendulum of Foucault, which brought to the 19th the experimental proof of the rotation of the Earth.
An exciting visit !